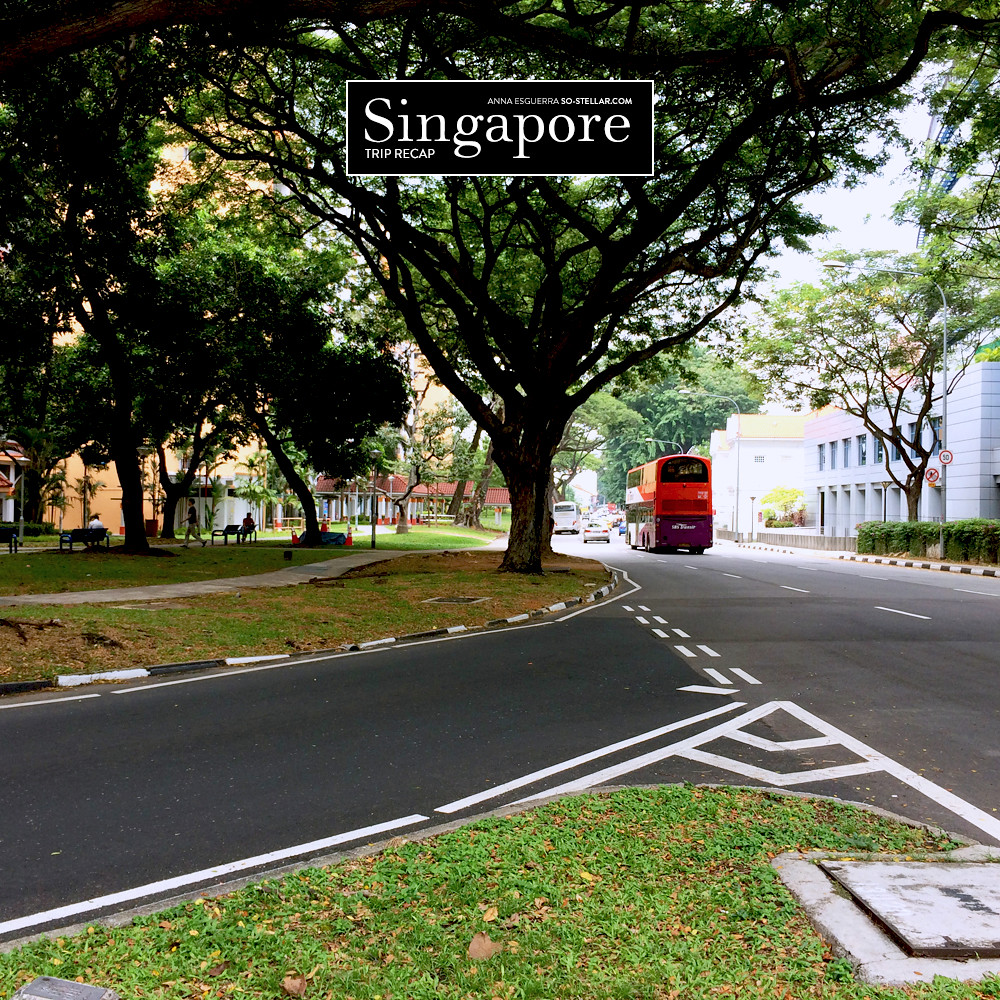 So.. Singapore. Where do I even begin with you? You were my final destination in my series of random overseas getaways last year. I had to make ends meet, get in touch with some people, just to make this trip push through. I almost backed out, too, if you knew the whole story. But I’m glad I didn’t. 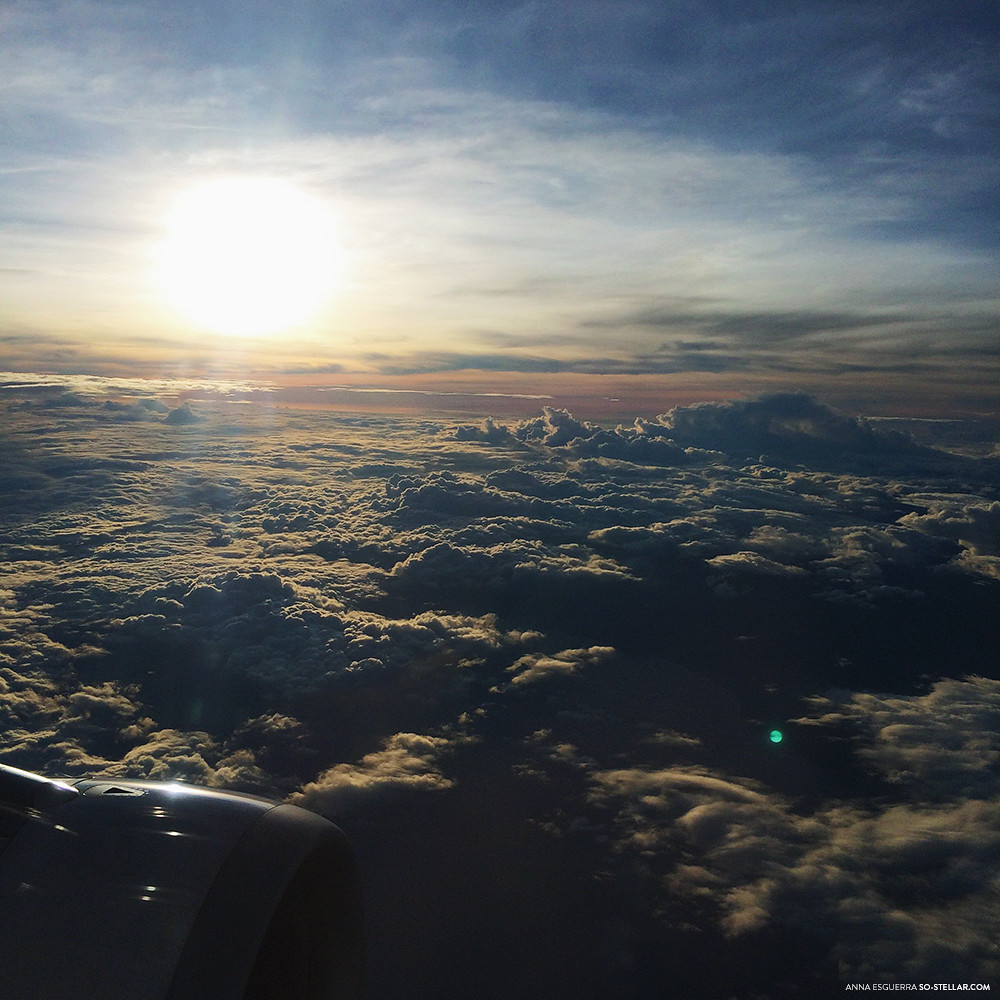 Coming to Singapore on a solo 5-day trip wasn’t my original plan. I had it planned with a friend, but it didn’t push through. I had already backed out of a trip, I wasn’t about to waste more money. Besides, I’m always game for outside of the country trips. Somehow I trust other countries more than my own when it comes to safety. 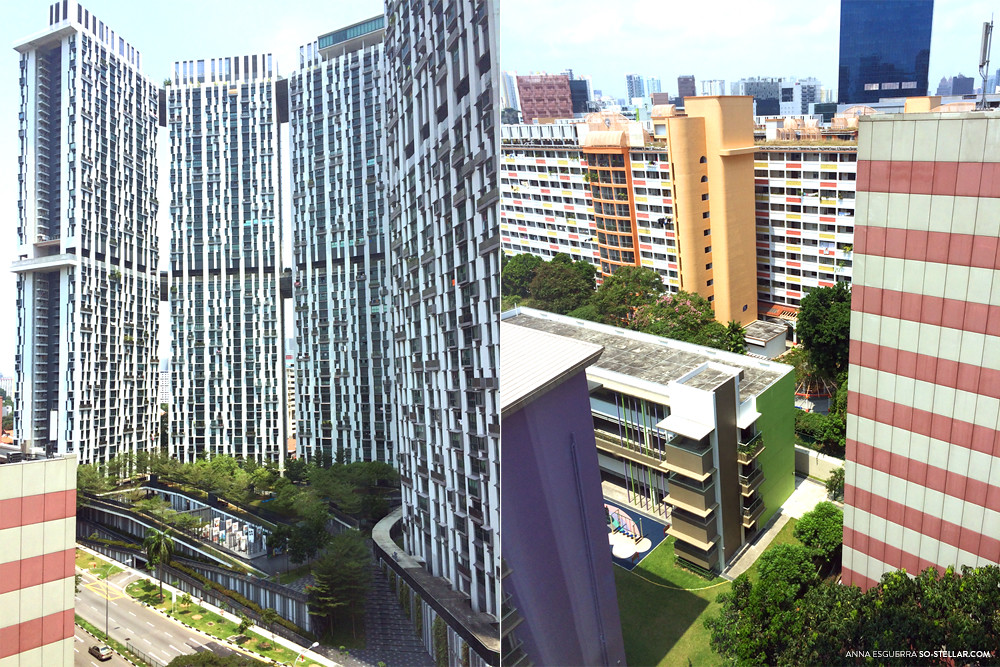 I loved the place where I stayed. Nice location, close to a train station, secure area, and lots of hawker areas nearby. It was close to Chinatown too. Extremely grateful for letting me stay under a friend’s roof. I would post photos but I’d rather not because privacy. 😛 I should’ve recommended them to post their place in AirBnb haha. Here are photos of the view instead. I think the building below in the second photo is a school.

I had 5 days to spare. By day 2 I was running out of things to do. Thinking of it now, I think the entire trip barely touched the tip of the iceberg and I didn’t get to savour in much cultural experience. Maybe because I was on my own? I had no company? I felt half a local by going around places by commuting using the train (I’ve yet to try riding a bus there, and I never got in a cab too) and always chose to eat at Hawker centres instead of upscale restaurants. The other half was the tourist side, because I felt isolated and only spoke to people when I asked for directions or had to pay at the counter. 2 out of 10 times it would be a Filipino that I encounter and it was amusing to me every time. 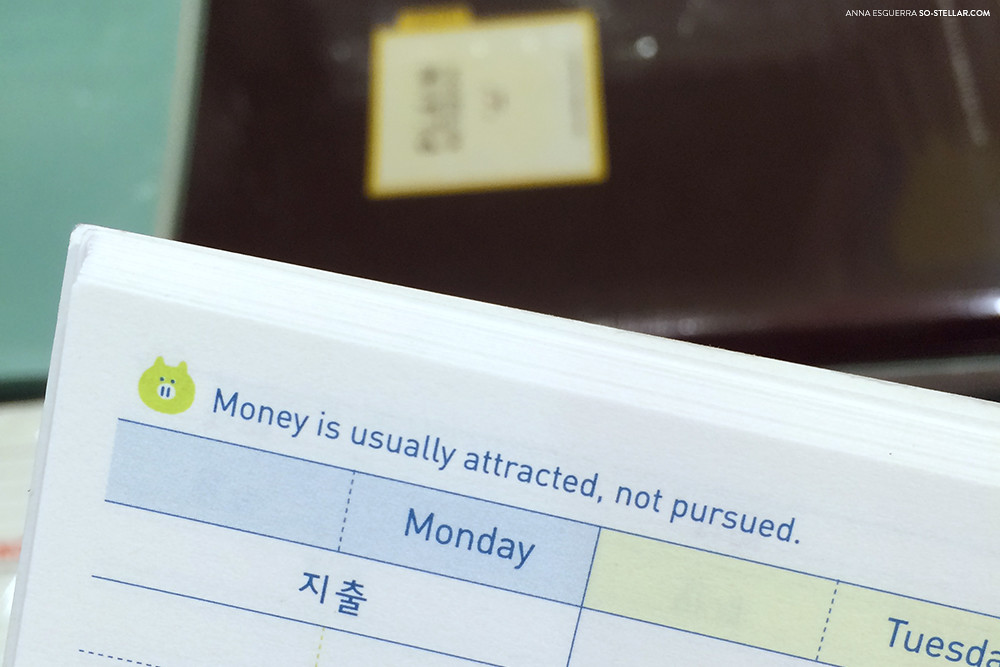 Yes, especially when your purpose of visiting was to shop til you drop. 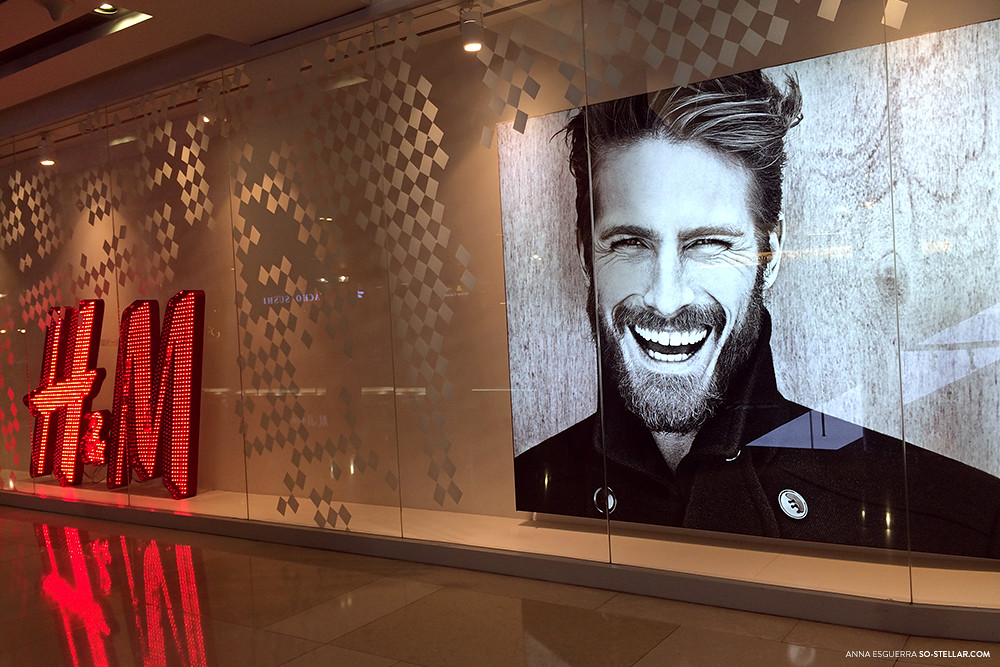 What is the name of this H&M male model? I gotta know, lol.

A typical day during that week starts by walking to the nearest train station from where I stayed which was at Outram Park. Once I’m out of the building, A ten-minute walk more or less. I should’ve checked out what were in those places if I took that turn far ahead.. but I was afraid I’d get lost, lol. 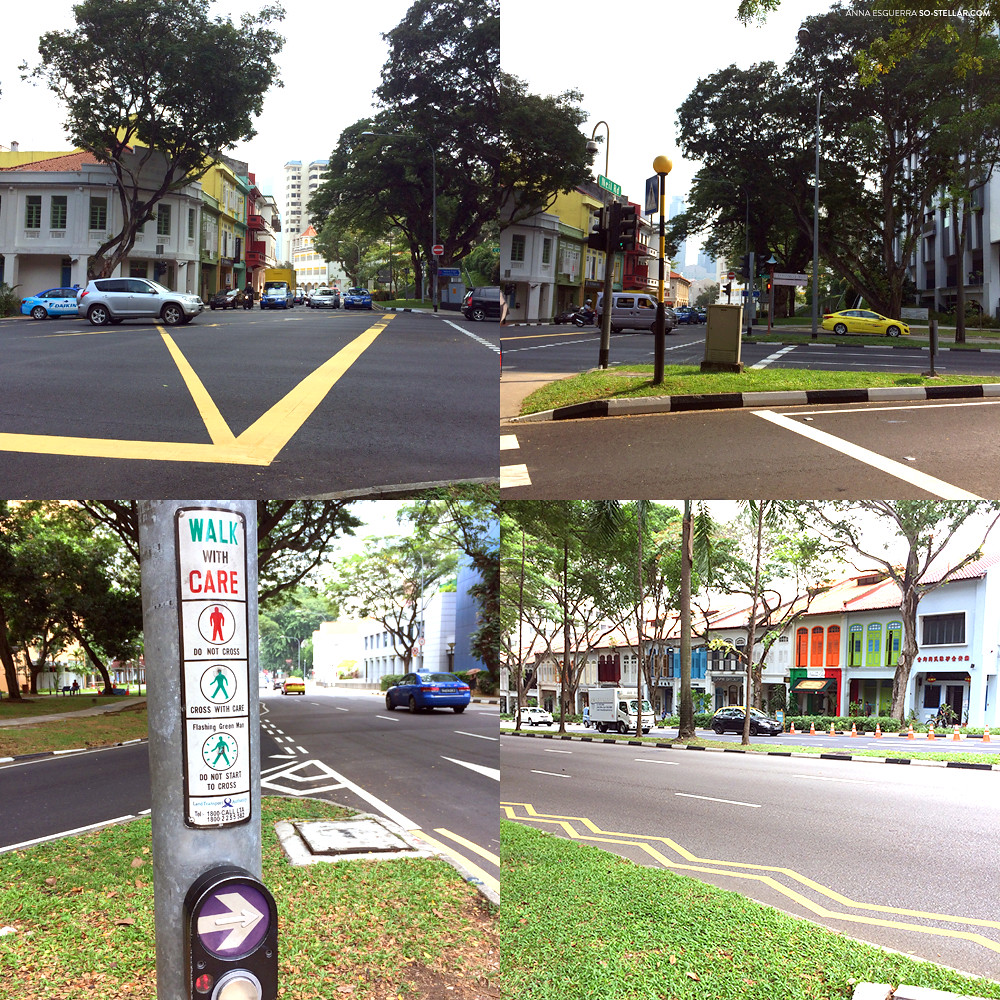 Intersection I pass by going to to the nearest MRT station

And then here’s another intersection while I was searching for that place in Bras Brasah that’s the mecca of art materials. That place was amazing, I bought a lot of stuff from there especially art books. The art shops weren’t complete of the stuff I was looking for but for other artists it may be helpful for them. I was searching for calligraphy stuff and they only have a few items for it, even the biggest shop there for art supplies. 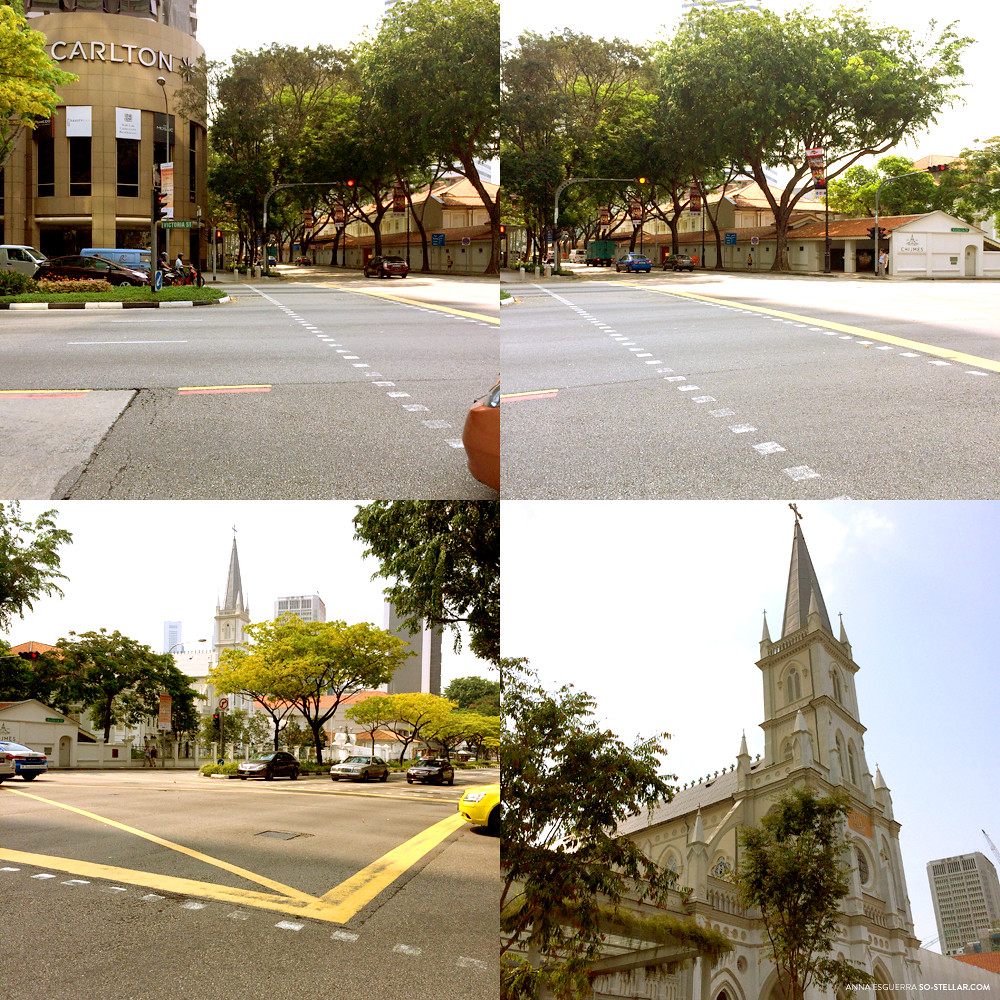 On my way to Bras Brasah Art Complex

One of the things I loved in SG is that I felt secure as I roamed around the city and not having to think of snatchers and the like. Whereas, if I was in my own country, I would have to look after my things 24/7 and guard my life too. Not saying that it’s 100% safe there, but it never felt life-threatening to walk around the street at 12 midnight (from the train station) to the place I was staying in SG. Maybe because I don’t look interesting enough to be approached and asked for anything, like I have read in other friends’ posts. I’m really just that unappealing I guess, haha! Put the same scenario in the Philippines and I might not even be around here to type this entry now. 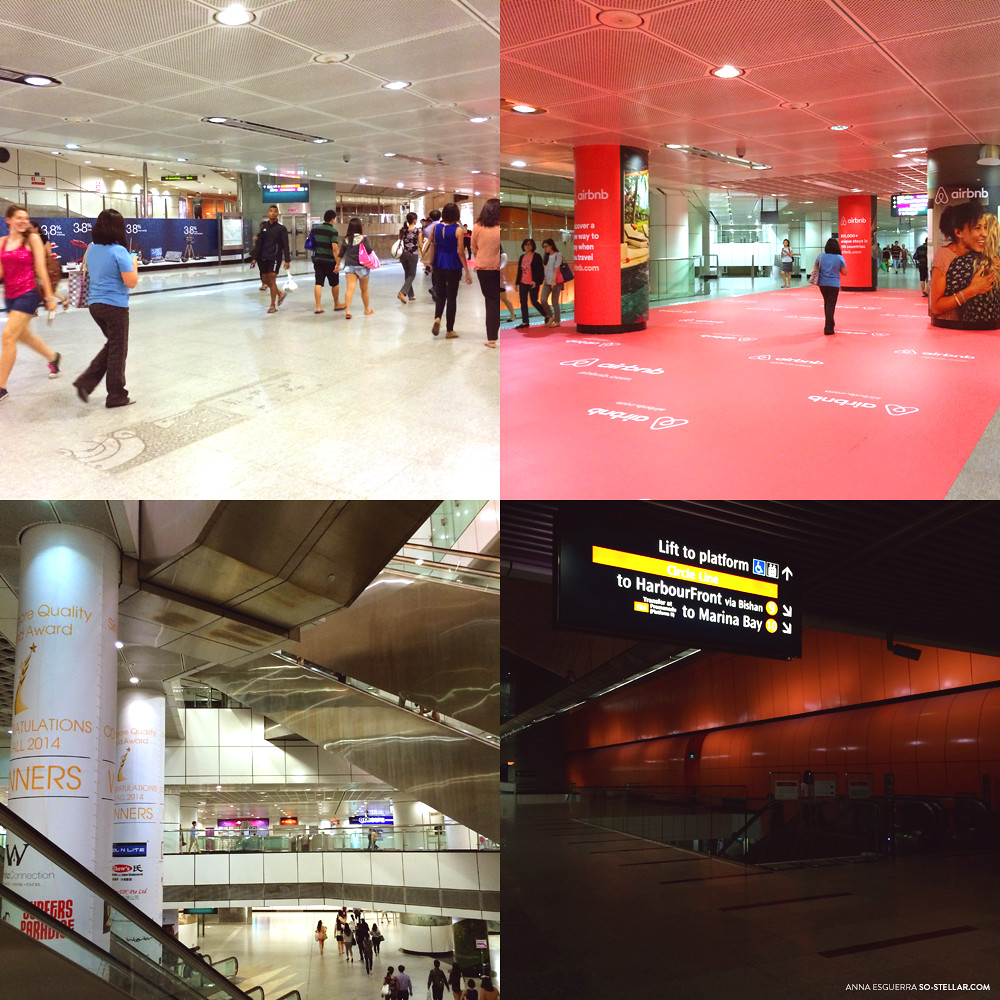 Can we also talk about their train system and how it’s so efficient, it puts ours in SHAME? I don’t mind, I am not even complaining if I have to walk going to the nearby train station every day of my life because the whole experience just feels so fun to do. And also, I made a booboo by impulsively taking on a train ride from Orchard station to Jurong East. Yeah if you look in a map it doesn’t look far, but it is! I had no idea it was THAT far. Haha! I almost missed my flight because the trip back and forth was almost 4 hours. At least I got to see some view outside the city, right? You can get by around the entire country just by train. I don’t know about you by that’s amazing.

Sure the Philippine MRT is getting an “overhaul” by increasing the price of fares, but eventually it was revealed the money will be used for something else instead. Welp. So much for being optimistic for our local train system to even be in the same caliber as SG or Hong Kong’s. 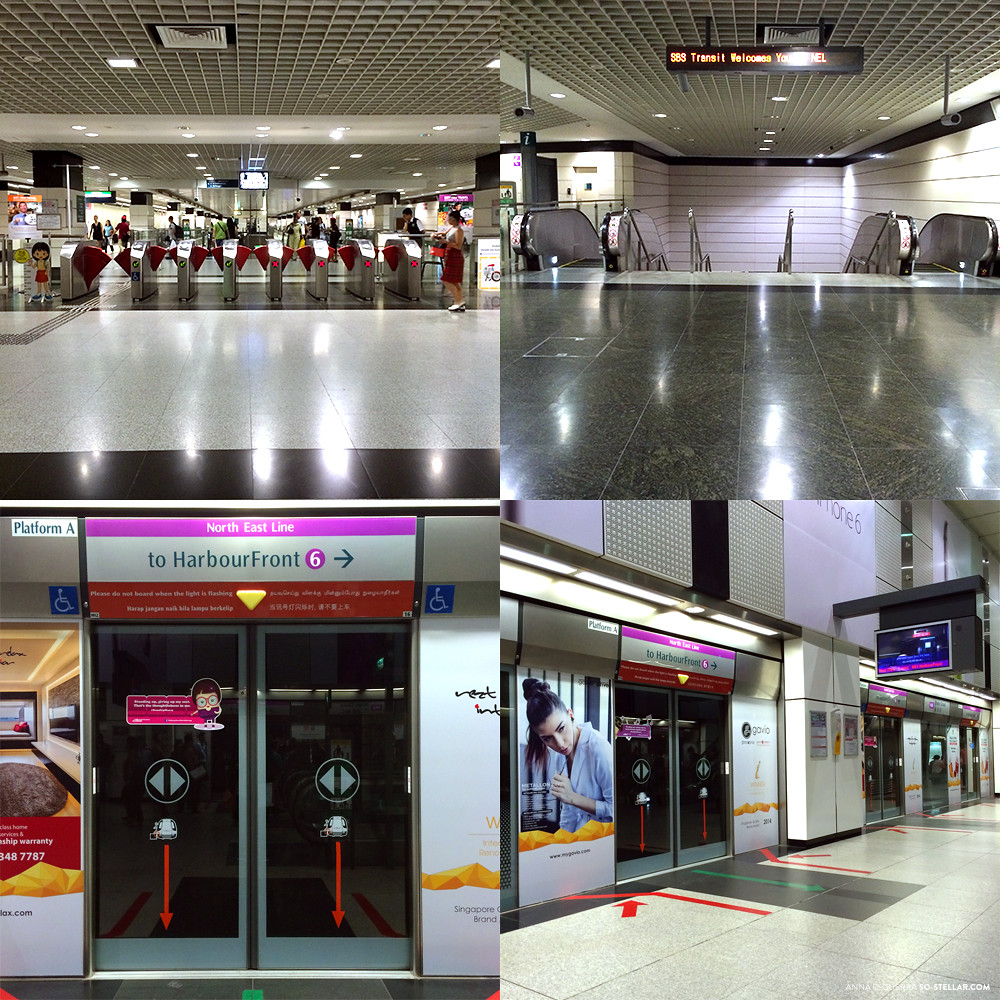 I also noticed that the country is slowly becoming a place for Filipinos. There are places which, upon stepping inside, instantly remind you of Filipino places and it’s not just because of the people populating the area. I am torn between thinking “this doesn’t seem right” and “I’m glad this place exists because anyone who feels homesick can instantly go here and feel at home”. Maybe it’s the fact that regardless where we are, we tend to bring our mannerisms with us, good and bad. I will not list them one by one but I know you know what I mean. If I had to name one it would be that most of us tend to disregard rules. I think that, soon as they’re past immigration, there goes the strict code to rules and respect their traditions (of the country their visiting) right off the window too. 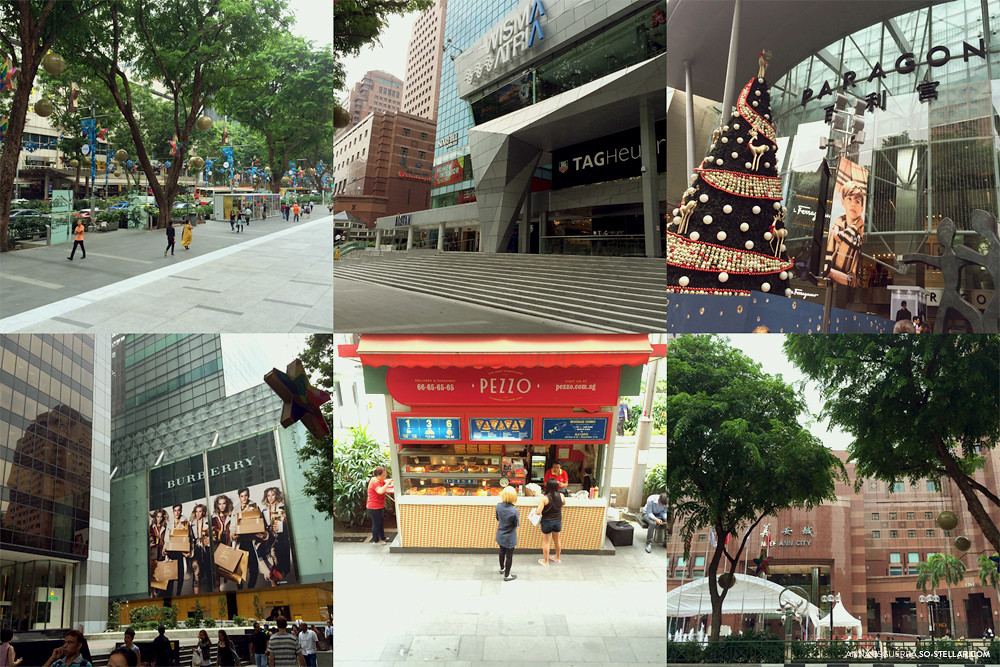 Strolling around Orchard Road and going in and out from one mall to another (lots of Filipinos around, too) 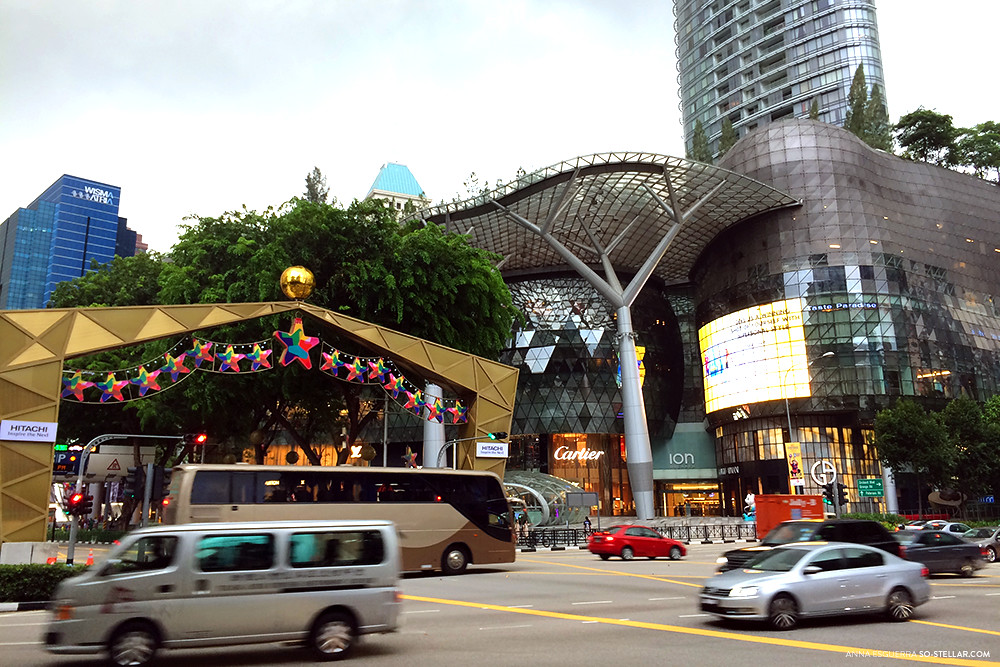 Food! Let’s talk about food. On my first night, I went to the first hawker centre I saw while strolling around Orchard road and I went through each stall one by one carefully comparing each of them. The moment I saw Chicken Rice in one menu of a stall, I quickly ordered a set and sat somewhere to eat. Felt a little puzzled after while eating because it wasn’t as good as I was expecting. People talk about it so much around Twitter, so I thought it must be that delicious. I prefer the Chicken Rice meal I order from a resto here in Manila. Different strokes for different folks, I guess.

The next day, I found myself in yet another hawker centre and chanced upon a good, tasty dish this time. The next succeeding meals were good, too! I regret now that I didn’t take a pic of all of them.. because I don’t want to be that person who obsessively takes photos of their food. Here’s a bowl of Ramen for the meantime. I really liked this one but as usual I didn’t take note of the name of the place.

Guys, don’t bother w/ super expensive food when you’re in Singapore unless that’s really your preference then okay. Hawker centres are the way to go. Much more bang for your bucks! 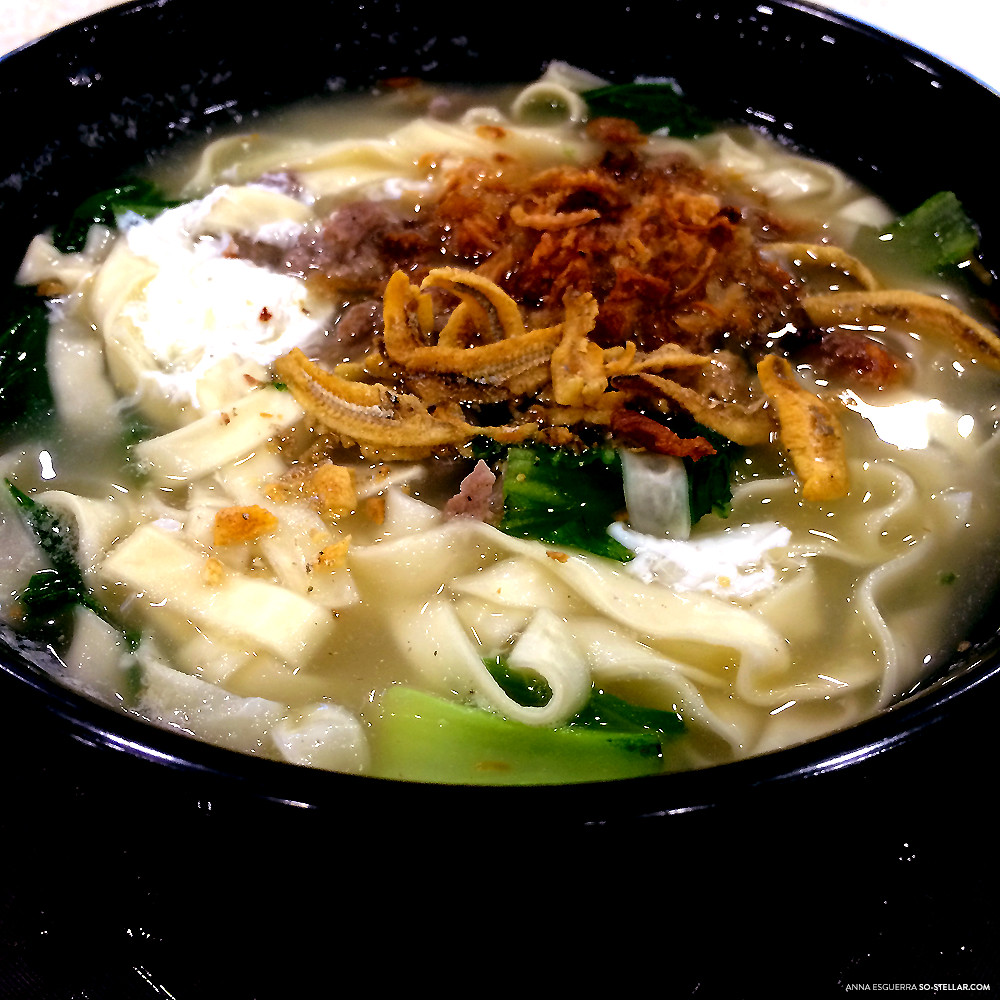 This delicious bowl of noodles was from the stall near Jollibee inside Lucky Plaza’s hawker centre, that’s what I can remember. Didn’t bother with trying Jollibee because there’s tons of it back home.. (right now I am craving for a Burger Steak w/ rice though)

The entire country feels like they have everything under control. People seem content with their jobs, they’re making enough or more to get by. Better than progressing, IMO. Well, to me at least it gave me that impression. Although I also have this nagging feeling of sadness and the word “routine” pop in my head whenever I try to come up with something to sum it all up. I think it was the homesickness kicking in because I came up with that realization around day 5, on my way to the airport. I wanna work here, haha I wish, but only for a short time.

On my final night, I made it a point to see what there is to see around Marina Bay area and the other surrounding places of interest for visitors and tourists like myself. I thought it would only take me a few hours to go from Marina Bay to Merlion Park, Gardens by the Bay, Helix bridge but it took me almost the whole night just in the first two locations that I didn’t go to the last two. Nonetheless, even if I only got to go around two places in that area it was a nice view. Here are some photos and panoramas below. 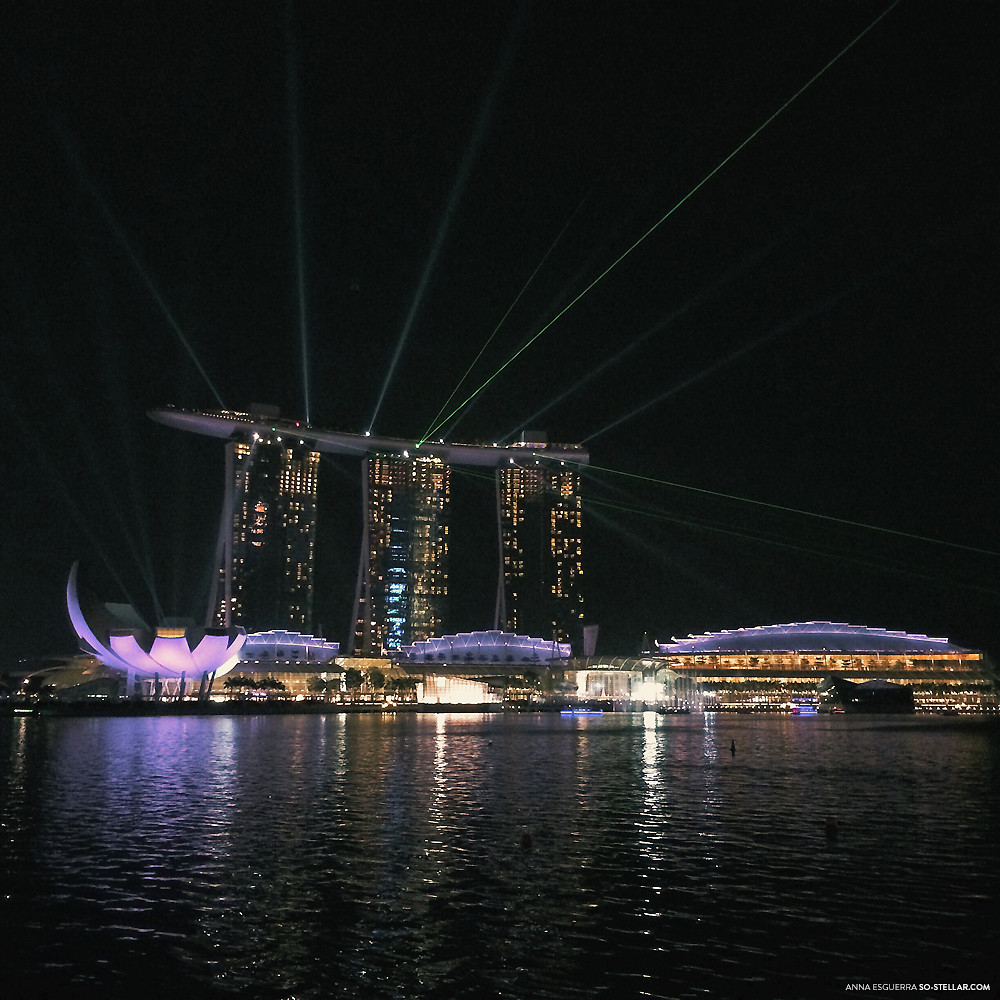 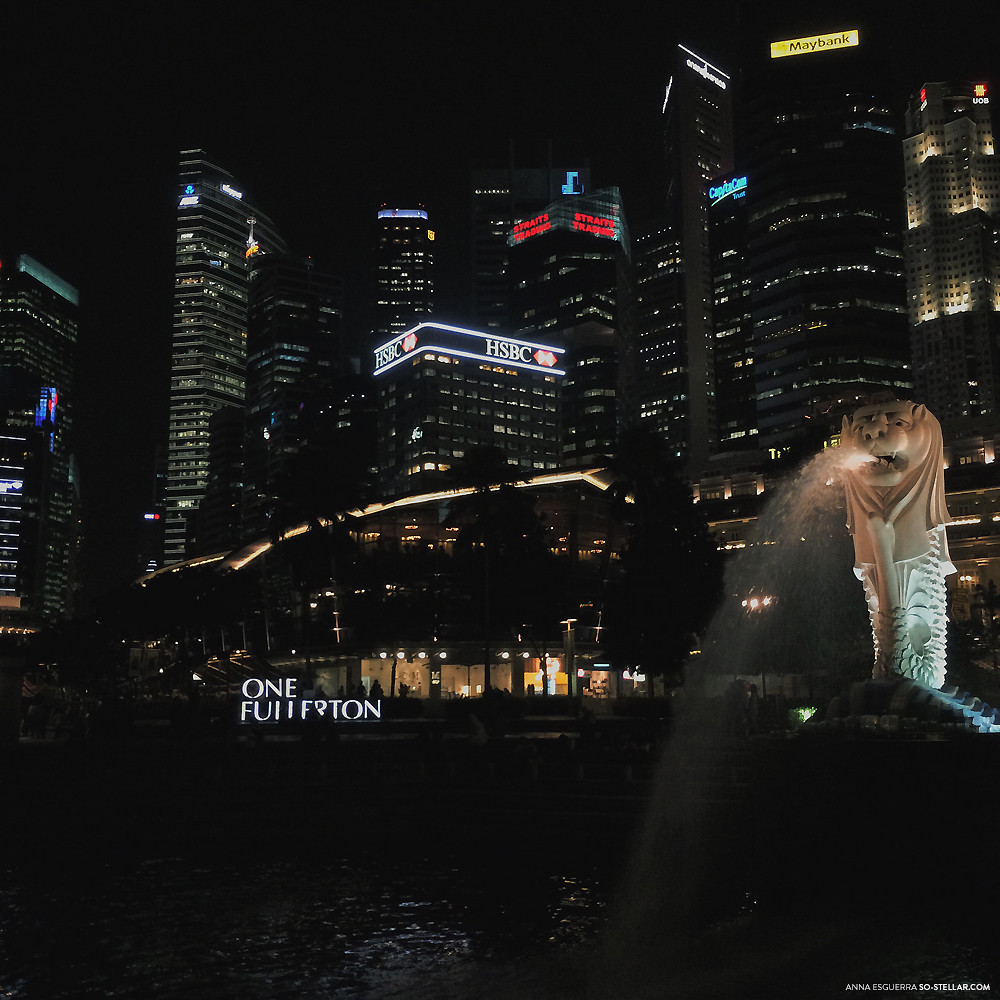 When I get the chance to go back, and I hope I do get the opportunity again.. I’m making it a point to enrich my “cultural sense” of Singapore rather than my materialistic side. Hahaha. Less shopping and spending on things, more walking and going to places and appreciating the views. Oddly enough, I want to see mundane things though like parks and beaches as opposed to museums (which probably has a costly entrance fee).. though there’s the Singapore Art Museum that I wanted to go in when I passed by but they weren’t open yet I think and I had a different priority that day (Bras Brasah Art Complex visit!). The outside is pretty picturesque though. And it was just across the hotel we stayed at during my very first visit there in 2010.

Oh and I would love to meet some of the people I made friends with way back in the day when we were just 13 year olds. I doubt they’ll see this but we still keep in touch and one of them said to message them as soon as I finalize my return. Can’t wait!