It’s been a while since I wrote a post about a book I recently read. Come to think of it, I think that was a post related to the Twilight Saga, and it was some two years ago! Time flew by me so fast. Cliche, I know.

I was contacted by the author of Taste, Kate Evangelista, last week to tell me about her book and if I would be interested to read it. Of course I said yes, otherwise this post won’t even be here in the first place. :)) I also asked I could take time w/ reading this since I’m a slow reader, to which she was alright with it as long as I post about it sometime soon. 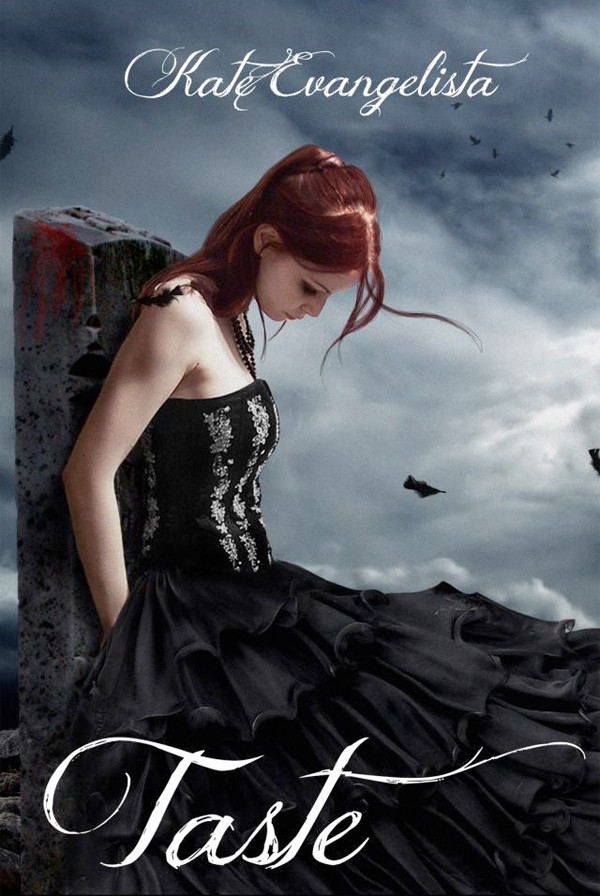 Well, took me only a few days to finish it. That was unexpected. Yes, that is a good sign that this book is that good. Here’s a description of the book, straight from her website.

At Barinkoff Academy, there’s only one rule: no students on campus after curfew. Phoenix McKay soon finds out why when she is left behind at sunset. A group calling themselves night students threaten to taste her flesh until she is saved by a mysterious, alluring boy. With his pale skin, dark eyes, and mesmerizing voice, Demitri is both irresistible and impenetrable. He warns her to stay away from his dangerous world of flesh eaters. Unfortunately, the gorgeous and playful Luka has other plans.

When Phoenix is caught between her physical and her emotional attraction, she becomes the keeper of a deadly secret that will rock the foundations of an ancient civilization living beneath Barinkoff Academy. Phoenix doesn’t realize until it is too late that the closer she gets to both Demitri and Luka the more she is plunging them all into a centuries old feud.

First glance: If I were to see this book at the bookstore, I probably wouldn’t notice it at first. TBH, books with covers like this remind me too much of Twilight and YA books that’s centered usually about a love story between paranormal entity and a human being. Lol. I tend to stray from books like that, shake my head in annoyance for finding that, yet again, the YA section has been taken over with vampire books. Ever notice that the Teen’s section at bookstores are full of books just. like. this.?

Anyway… I was very relieved and happy to find out that this is not about vampires at all. It does have some similarities, but very small, to Twilight. Once your past that, you’ll be glad that you sticked around a few more chapters to find out that it’s actually about……… welp, you gotta read to find out. 😉

Actually, the front cover is very misleading. I fail to find the connection between the girl and the main character, Phoenix McKay. The setting of Hogwarts from Harry Potter comes into my mind instead.

What I liked about it: The first few chapters were enough to get me hooked to keep flipping the pages and following what happens as Phoenix McKay gets deeper into the world of the “Night Students”. Something about the first chapter got me curious as to what will happen next, so that made me keep reading.. I didn’t realize I was halfway to it already.

Sorry if what I’m saying isn’t really convincing or may seem like a “review”. I suck at doing this especially if I don’t want to spoil you future readers and fans of Taste!

Throughout the book, I noticed that there are things that, to me, sounded like Filipino references. One of them would be the food that people like Demetri eats. In the book, they call it the Kikaron. If you’re Filipino, you’ll instantly get what that is. I thought that was smart to name their food like that, haha. I also like that the character is selfless and doesn’t put herself first before anything else. The back story of Taste is well-put and consistent, you will get hooked.

What impressed me with the story of this book is how the author was able to merge a real-life history with the factitious world of this story. She made it so convincing and seemingly possible to happen in real life. It doesn’t look like it was forced, too. At some point, while reading, I had to nod in agreement and mutter a “why not? That’s possible”.

..that and lines like this, as said by one of the characters. HAHA, Kate, you are a genius!! (warning: SEMI-SPOILER)
Show ▼

“Were you hoping I was something else? A vampire perhaps? Or a werewolf maybe? I hear they are popular these days.” – Demitri, to Phoenix McKay, telling his secret to her.

The ending is solid and proper. The characters all had proper closure. I think the book can do without a part two.

What I did not like about it: I’ve been rereading it for a few days now and trying if there were any parts that I didn’t like or didn’t agree too, but I can’t find any that’s worth mentioning. Some reviews stated that the parts when Phoenix keeps mentioning her late mother and how her situation reminds her of that time get tiring after a while. Personally, I didn’t find that tiring or bothersome. I thought that was a nice reminder to her, and in a way it keeps her grounded. Not a big deal.

Is it worth reading? Most definitely! Though, like I said in the beginning of the post, if you are not a usual reader of YA novels like this especially if you’re the type to judge a book by its cover, you will probably not notice it until someone talks about it.

It has a smart background, well-put and well-written story. It isn’t draggy to read. The characters are lovable and as you keep reading, you’ll start warming up to them (Side note: Most people will probably favor either the two love interests of Phoenix, Luka and Demitri, but I personally find Dray to be my favorite character). The concept is very original, too.

TLDR version: THIS IS NOT YOUR TYPICAL VAMPIRE, PARANORMAL ROMANCE YA NOVEL. I am encouraging you to give Phoenix and the gang a chance and read “Taste” because you will love it from cover to cover once you get past chapter 3.

And I bet that when you are done with this book, you will be over vampires and surely you’ll be into zombies now.

Disclosure: I was provided a digital copy of the book by the author in exchange for an honest review.